Our office has a long h 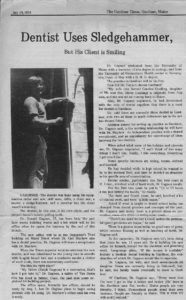 istory of providing top notch dental care in the Gardiner area, stretching back to 1978 when Dr. Shanna’s father, Dr. Donald Gagnon, began practicing dentistry in downtown Gardiner.  Originally from Aroostook County, he chose to move his young family back to Maine after completing dental school at the University of Connecticut.  The original office was above a bank diagonally across the street from the A1 Diner in a space shared with Dr. Carl Mayhew.  Dr. Gagnon was featured in the July 19, 1978 edition of The Gardiner Times; the interview took place as he was building and outfitting his first operatories.

When he first started, business was slow; he had enough time to cast gold crowns himself, work that is usually outsourced.  Slowly but surely, he built a loyal following of patients with his aesthetic, reliable restorations and conservative approach.  His practice eventually outgrew the space in downtown Gardiner and he began construction on a new building on Merrill Street in Farmingdale in 1987.

The new building enabled Dr. Gagnon to continue adding staff members and equipment while providing patients with a comfortable, appealing setting.  The new location was more convenient and accessible as well, with plenty of space for parking and situated perfectly between Augusta and Gardiner.  He shared the space with a handful of dentists through the years, including Dr. Shanna starting in 2004 and Dr. Carolyn Morin starting in 2008.

After gradually scaling back, Dr. Gagnon fully retired in July of 2012, leaving his patients in the capable hands of his daughter, Dr. Shanna, and Dr. Morin.  Many of his long time patients were reluctant to see any dentist other than him – clearly he’ll be missed.

Dr. Shanna intends to continue practicing the way her father did, delivering the highest quality dental care with the same conservative approach.  We’re honored to still be serving some of Dr. Gagnon’s first patients from 1978, and look forward to establishing relationships with new ones.